BY MADELEINE MARR
mmarr@MiamiHerald.com
You didn't need a lifetime subscription to Gourmet to recognize the names on the chefs' jackets at the South Beach Wine & Food Festival's $600-a-person dinner for Ferran Adri, the Spanish creator of the incredible edible foam:

''This is a night that we all work toward -- a once-in-a-lifetime event,'' said Marc Ehrler, executive chef at the Loews Miami Beach Hotel, where the 600-guest, seven-course, over four-hour meal took place Saturday night. Ehrler also orchestrated the army of 125 waiters and prepped the decadent sixth course, confit of beef tenderloin with a mascarpone and Gorgonzola truffle ``opera.''

The guest of honor looked positively slack-jawed himself when he entered the Americana Ballroom for the pre-dinner reception by chefs Norman Van Aken and Emeril Lagasse (conch ceviche, Spanish tortilla, pig skins in a blanket).

''I am humbled beyond words,'' said the Barcelona-born Adri, 43, with a huge grin and a charming lispy Catalonian accent. ``I don't know why they would do all this for me.''

Suddenly, the diminutive chef is cloaked by a large, lean figure in a smart suit. Big hug. It's Anthony Bourdain, Food Network star and host of the documentary Decoding Ferran Adri, a glimpse into the cook-cum-scientist's lab that was screened for festivalgoers earlier in the day.

Before Adri is whisked away, the big question has to be asked:

The first course is Andrés' Organized Caesar Salad: A plate dotted with three little tubes, one with a raw egg yolk on top, lying beside a pasty orange dollop of sea urchin.

Nearby, dozens of waiters, Loews chefs and Florida International University culinary students hunch like microsurgeons over dishes of raw Japanese snapper. It's Matsuhisa's turn: Usuzukuri, paper-thin slices of sashimi drizzled with dried shiro (sweet) miso, yuzu juice and, in a nod to Spain, extra-virgin olive oil. The flavors burst and bounce off each other divinely.

Over in his plating area, Keller is readying Peanut Butter & Jelly -- terrine of moulard duck foie gras with roasted Virginia peanut tuile (a sort of cracker) and Concord-grape preserves.

''I wanted to go where few people have gone before, even though that sounds like Star Trek,'' says the soft-spoken Keller. ``To create reference points and memories of great pleasures, which is what [PB&J] was to me as a child.''

Keller's obscenely rich bundle of nutty, deep jolts -- unlike anything Mom ever packed into a lunchbox -- is a hot topic among diners.

''Simple but stellar,'' says Creighton Peet, a Cape Cod chef who says he comes to the festival for inspiration. ``T.K. is like my Obi-Wan.''

How to top off a meal to end all meals?

''Would I order such a rich dessert -- or for that matter, rabbit, urchin or foie gras on a normal day? No,'' says Akasha Richmond, a private chef who cooks organic for Tinseltown stars. ``I have salad with low-fat dressing.''

She pats her board-flat stomach and sums up the evening:

''But when Michelangelo or Picasso puts a plate in front of you, you eat it,'' she says. ``That's why we're all here.'' 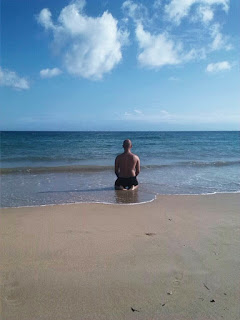 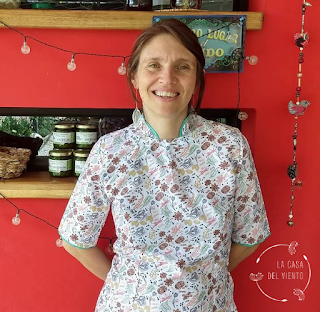